I want to keep track of the water level in the tank as well and I tried the same brute force approach as for the soil moisture. Some variants of the temperature sensor I use can also measure air humidity. My guess was that this sensor is also resistive. The sensor I use does not  measure air humidity, but I guessed that all that is missing is the sensor and I was right, there were a few unused connectors on the board and when I attached a resistor, the sensor started giving humidity readings.

So I tried just connecting the sensor inputs to two leads on a piece of veroboard that I put in the tank, hoping that the resistance of the water would match some part of the range of the sensor. 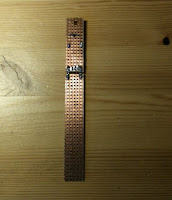 It showed that the resistance got a bit too low, so I tried a slightly different approach with the two poles more separated: 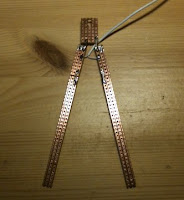 This works better, but the precision is not very good. At least I get some indication of the level and a clear indication when the tank is empty as the water does not reach the poles.
Posted by NetHomeServer at 13:27