Next step is the sensors for soil moisture of the plants and water level in the tank. I don’t really need very high accuracy in either case, just some indication of the levels. 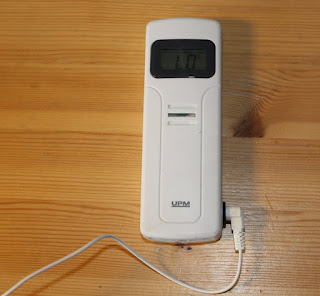 So I tried a very simple solution. I have been using wireless thermometers from UPM which have very cheap remote sensors sending on the 433MHz band. The actual temperature sensor is some kind of resistive NTC-sensor, and the resistance of the soil will wary with the water content, so I tried a very straight on solution: I cut off the sensor and mounted some random connector I had lying around, (just to get two metal pins with a fixed distance) and stuck that in the soil. And I was lucky – the resistance of the soil with different water content levels matches resistance range of the temperature sensor! 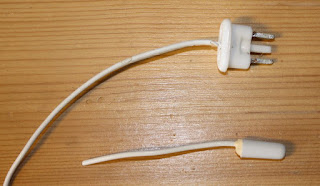 The NetHome-server can read the raw values from the wireless sensor and I get a range from a raw value of 1936 (soil saturated with water) down to 950 (soil dry). So just by cutting a cable I get a wireless soil moisture sensor! I know that you really should use AC current for this kind of measurement and that the resistance may be affected by a lot of other factors, but as ballpark figure this will probably do fine.
Posted by NetHomeServer at 21:50